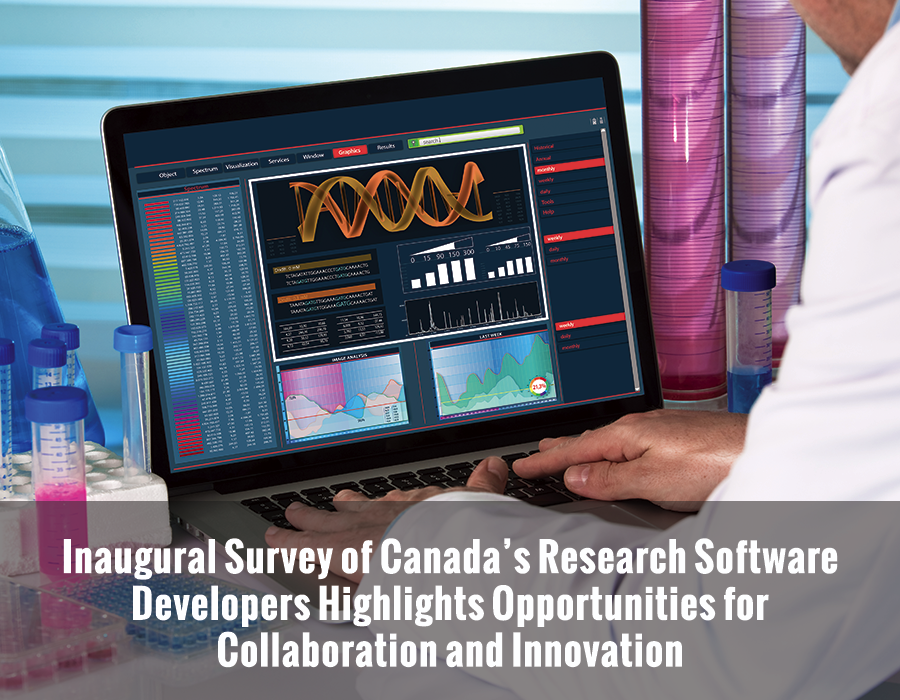 Most research software in Canada is developed by researchers themselves, rather than software developers

CANARIE, a vital component of Canada’s digital infrastructure supporting research, education and innovation, today announced the results of its inaugural survey of Canadians who are employed to develop software to support scientific research. The study was undertaken in collaboration with the UK Software Sustainability Institute (SSI) to better understand the needs of Canada’s research community. The results will help evolve CANARIE’s Research Software Program, ensuring Canadian researchers have access to world-class software tools to accelerate their research.

One of the most unexpected results of the survey was that developers of research software are not primarily students or early-career researchers. Of all respondents to the survey:

Software is Crucial to Disciplines Beyond Computer Science

The survey illustrates that software touches research in a wide range of scientific areas, with respondents reporting software development to support 30 different disciplines. The backgrounds of respondents are equally varied, with 52 different areas of academic expertise listed by participants, only 16 of which were related to computer science or software development. Despite this wide range of areas of expertise, 67% of respondents have been acknowledged for the contribution of their software in published research papers and more than half have presented some aspect of their software work at a conference.

Software developers supporting such diverse disciplines can only benefit Canadian research. CANARIE’s Research Software Program strongly advocates for software re-use, and evidence from Program participants has shown that cross-discipline software collaborations can and do lead to innovative research collaborations.

Over the years, the private sector has developed processes and procedures to make software development extremely efficient and robust. In contrast, 66% of survey respondents indicated that their last project followed no formal software development methodology and only 11% of respondents indicated that their project teams included dedicated testers.

The collaborative nature of scientific research extends to software as well, with 67% of respondents indicating that their software was used by researchers at multiple institutions. Despite this, the survey identified a need to assemble those who develop software for different institutions and on different projects to share software and ideas, with 75% of respondents indicating an interest in the creation of a Canadian association of research software developers.

CANARIE and SSI will continue to study the results of this survey and lessons learned in the UK to plan the evolution of the Research Software Program.

Twelve provincial and territorial network partners, together with CANARIE, collectively form Canada’s National Research and Education Network (NREN). Canadians at universities, colleges, research institutes, hospitals, and government laboratories rely on this ultra high-speed network to collaborate in data-intensive, cutting-edge research and innovation within Canada and with colleagues in over 100 countries.

Beyond the network, CANARIE funds and promotes reusable research software tools to accelerate scientific discovery. CANARIE also supports Research Data Canada as it leads national research data management initiatives, and through the Canadian Access Federation, provides identity management services that enable secure, ubiquitous connectivity and content access to the academic community. To boost commercialization in Canada’s technology sector, CANARIE offers cloud resources to startups through its DAIR service, and links a powerful community of public and private sector partners in the Centre of Excellence in Next Generation Networks (CENGN).